The Cast of Oz 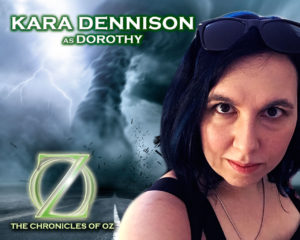 Playing the central role of Dorothy Gale herself is Kara Dennison. Regular listeners will remember her as the Computer in the Doctor Who Crossover Adventures, but that’s only the start of what Kara gets up to. Writer, presenter, performer, artist, and costumer, she’s also one of the faces behind ReGeneration Who, the mid-Atlantic’s premier Doctor Who convention.

We’re very pleased to have Kara on board to play this iconic role. 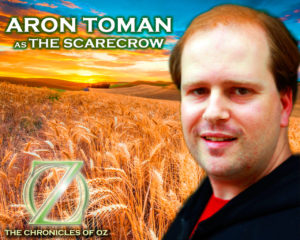 Playing the Scarecrow is Aron Toman, who also writes and directs the Chronicles of Oz. You’ll remember Aron as the Doctor in the Doctor Who Crossover Adventures, and has been making himself known around the amateur theatre circuit in Melbourne, Australia as Artistic Director of Pop Culture Theatre.

Playing the Scarecrow has been a life-long dream of Aron’s, and he’s thrilled that he’s finally got the opportunity to bring him to life. 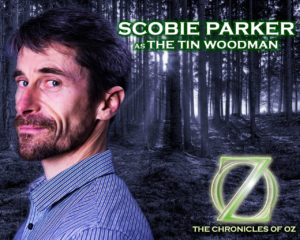 Scobie Parker is taking on the role of the Tin Woodman. He may be new to the audio drama world, but has had over twenty years of experience in theatres across Melbourne and Australia, as well as small roles in a number of long running TV shows and short films.

We’re very much looking forward to hearing him show his metal as the Tin Woodman! 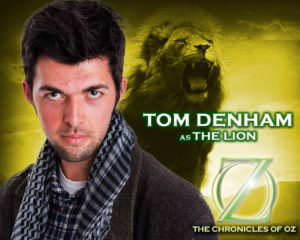 Tom Denham is a familiar voice to many audio drama listeners, and now he’s adding the Cowardly Lion to his repertoire. One of the founders of Illusionist Productions, and soon to launch a new series of Doctor Who audios under Hive-Mind Media, Tom’s finally appearing in a Crossover Adventure Production. But does he have the courage to get to the Emerald City? Of course! 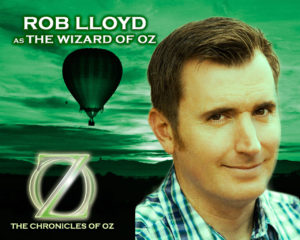 The Wizard of Oz

You can’t adapt The Wonderful Wizard of Oz if you don’t have a Wonderful Wizard – and Rob Lloyd is definitely that! You’ve seen him on ABC3 as Bertram Poppingstock: Problem Solver, you’ve seen him on stage in the comedy shows Who Me and others, you probably know him as that guy that looks a bit like David Tennant. His list of credits are as long as your arm, and we’re very pleased that we’re adding The Chronicles of Oz to that list.
You can read more about Rob at http://www.roblloyd.com.au 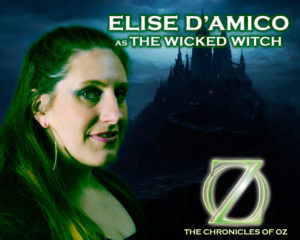 The Wicked Witch of the West

Elise D’Amico is another new voice to audio drama – but given how frightening she is as the Wicked Witch of the West, perhaps that’s for the best! Elise is a regular performer on the Melbourne stage, with key roles in My First Time, Hotel Sorrento, Cat On A Hot Tin Roof and dozens more. She’s clearly having a blast defying gravity in Oz, and is sure to finally achieve that ambition of terrifying small children across the world. 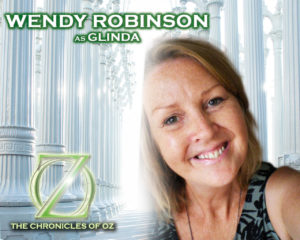 Glinda, Good Witch of the South

Whenever there’s evil, there’s always good, and witches of Oz are no exception.

Playing Glinda the Good Witch of the South is Wendy Robinson. Regular listeners will remember Wendy as the Angel of Blinding Light in our most recent Doctor Who adventure. In the rest of the world she’s a freelance voice actress, having worked for Swarovski, ProActive and Mercedes Benz Melbourne (to name a few). Wendy says that her happy place is behind the mic, and these audio dramas have been great fun to be involved with. 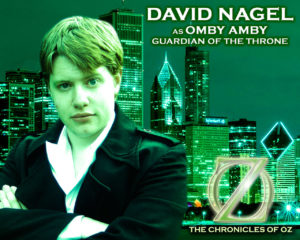 Omby Amby, Guardian of the Throne

A well-run Emerald City needs a well-organised Chief of Staff, and as Guardian of the Throne, Omby Amby keeps everything running to schedule! At least until some girl from Kansas turns up…

Playing Omby Amby is David Nagel, who regular listeners will remember from most of our previous episodes, he’s usually appears in there somewhere. He’s also a familiar voice across the interwebs, as the Doctor in his own series produced by DAM Productions, plus voicing for commercials, audio books and dozens of other things. He’s also doing half the sound design for the The Chronicles of Oz – in between his sound design work with Big Finish Productions of course!

We’re very lucky to have David working with us so closely, and looking forward to hearing him keep the Emerald City in line! 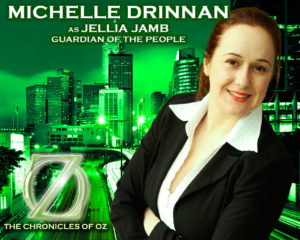 Jellia Jamb, Guardian of the People

When you want to know what’s happening in the Emerald City, when you want to be sure your getting the right information, then look to Jellia Jamb. As Guardian of the People, she shapes the Wizard’s message to reassure the people of Oz that everything is fine. The Witches can’t get you here, and the Emerald City is protected. You couldn’t ask for a better press secretary!

Playing Jellia Jamb is Michelle Drinnan, another recruit from the Melbourne theatre scene. She a multi-award winner on the Victorian Drama League One Act Play Festival circuit (as indeed are most of our cast) with prolific roles with Gemco Players and other companies. She also runs her own company, Moz Theatre Enterprises. She’s passionate about community theatre, in particular youth theatre, and volunteers with several companies in many aspects to grow the theatre industry. 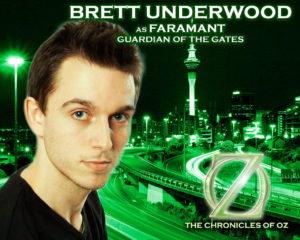 Faramant, Guardian of the Gates

Rounding out the administrative team of the Emerald City is Faramant, Guardian of the Gates. As head of security, Faramant sees to it that the Emerald Citizens are safe and protected from threats from the rest of Oz. He supervises the Storkguards, he directs the Palace Guards and maintains order. Nothing, short of a girl in magic shoes and a yappy dog can get past him.

Brett Underwood plays Faramant, who regular listeners will remember as Jayden from the Doctor Who Crossover Adventures. But Brett’s credits are extensive – he was in Harry Potter and the Half Blood Prince as Young Lucius Malfoy, he co-hosted Totally Doctor Who, had roles with Big Finish Productions, and is a prolific performer on YouTube. You might have seen his most recent web series Bitesize Who, which is definitely worth seeing if you haven’t! 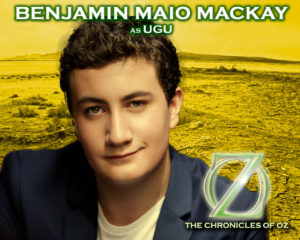 Every Wicked Witch needs a minion, and of all the Winkies she chose Ugu. Poor Ugu. Life is never easy when you’re in the employ of a Wicked Witch. When you know that at any moment she could lose her temper and fry you on the spot. It’s always living on a knife edge, and poor Ugu is always terrified!

Benjamin Maio Mackay (with the longest name in the cast and the shortest character name!) has been busy with lots of different projects. He’s the guy behind Preachrs Podcast Online and OnStage, his interview podcast Talk 2 Me! showcasing a range of ctors, directors, writers and performers you’ve definitely heard of. He’s also hosted programs on ABC Radio and is often seen touring stage shows around Australia. Benjamin’s current project is the Great Detectives of Old Time Radio Live National Tour, produced, adapted and directed by himself. 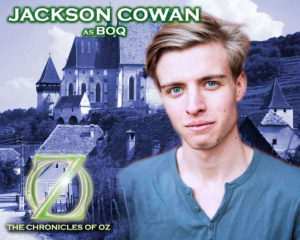 When a Kansas farmhouse came crashing down into his town, Boq was the first Munchkin on the scene. He was the first to get Dorothy to safety and the first to put his hand up to help her on her way to the Emerald City. Not bad for a Munchkin farmer who, up until today, was quite used to living his life under the rule of the Wicked Witch of the East. Now he’s off to see the Wizard!

Playing Boq is Jackson Cowan, another actor from Melbourne. A brilliant improviser, Jackson is a cast member of Impro Melbourne and Interrabang (formerly Exploding Heads Impro) as well as many student short films. Now he’s playing Boq, and looks forward to helping Dorothy and her friends on their journey down the Yellow Brick Road. 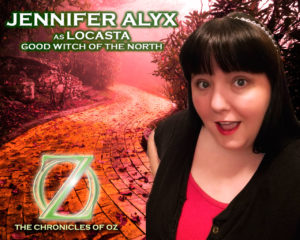 Locasta, Good Witch of the North

There’s more than one good witch in Oz, thank goodness, and in the north where the Gillikins live is Locasta, the Good Witch of the North, who feels it her duty to set Dorothy on the right path in this new land. Literally.

You’ll all remember Jennifer Alyx as Destina from the Doctor Who Crossover Adventures, of course. But her voice acting credits are as long as your arm. You can her her work in Magical Girl Lyrical Nanoha, Skip Beat, Heroes of Newrth, Harmony Revolt, and Little Witch Academia among others. We’re very pleased to have Jennifer back on board for another Crossover Adventure Production! 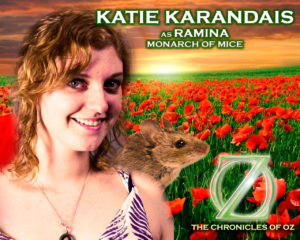 One final major cast member to announce – playing possibly the smallest monarch in Oz! Katie Karandais plays Ramina, Queen of the Field Mice. Katie’s another actress based in Melbourne and making a name for herself in the Victorian Drama League One Act Play Festivals with Pop Culture Theatre Inc. Katie’s also a talented photographer and is part of the team at JoKa Photography. Many of the photos you’ve seen here were taken by Katie.

We affectionately call her “Kitty”. Given who she’s queen of, we find this hilarious.

The Crew of Oz